While Publicly Seeking Unity, the DNC is Censoring a Convention and Silencing Dissent 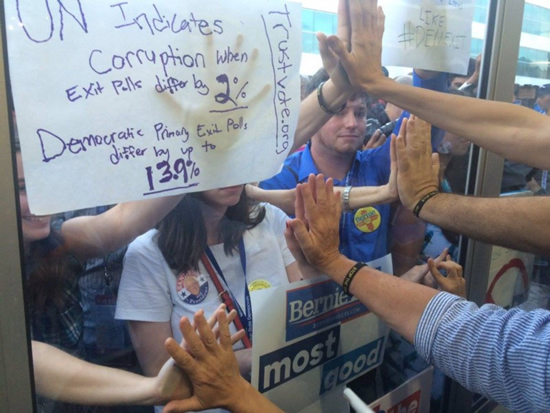 The Democratic National Committee professes publicly that it longs for peace and unity between supporters of Bernie Sanders and Hillary Clinton. The DNC’s actions as organizers of the convention, however, have repeatedly had the opposite effect.

To begin, no one who wanted Bernie Sanders as the nominee was ever allowed near the microphone on stage. It is an open convention, regardless of the way it’s been covered in the corporate media; Hillary Clinton did not get the required 2,383 delegates required to win outright from pledged delegates. The superdelegates are casting the deciding votes this week. Bernie Sanders, although issuing an endorsement of Clinton earlier this month, hasn’t conceded the race nor released his delegates and so he could become the nominee.

Nevertheless, the entire first day of the convention — ostensibly the “Bernie Day” — featured no speakers who favored a Sanders nomination. Several one-time Sanders supporters who now favor Clinton were allowed to speak.

Justin Baird, a Sanders delegate and whip from Washington state, explained from the convention floor that instead of having both candidates’ surrogates make their case,  Monday only featured speakers who advocated voting for Hillary. “Even if the outcome seemed obvious, it was painfully clear that if that was Bernie Day, it was really just another Hillary Day. It riled nearly half the delegates.”

Simply allowing a few Sanders supporters — Nina Turner, for instance, or Tulsi Gabbard, or even Jane Sanders — to speak Monday would have immediately fostered feelings of unity. Instead, by most accounts the convention got off on the wrong foot, fomenting feelings of suppression right away, even before Bernie gave his heart-rending “three minute ovation” speech later that night.

And if that weren’t bad enough, they’ve filled the volunteers’ seats with Hillary supporters — or possibly actors — to give the impression of unity on television. There is something deeply disturbing — and deeply illusory — about how this whole convention feels to many Sanders supporters.

“The volunteers were identified by the campaign and by the delegates after lots of hard work,” said Catherine Berry, an official volunteer for Bernie Sanders from Seattle. “I would have run for delegate, actually, but I couldn’t, since I had to be out of town that day. I’ve worked so hard, and I was honored to be sent to the convention as a ‘super volunteer.’”

Berry arrived in Philadelphia eager to represent both Bernie Sanders and her progressive community in Seattle.

“I was excited to see what the convention would be like. I was also interested in hearing the speeches from the party leaders,” she said. “If someone’s going to convince me to vote for Hillary Clinton, I want it to be someone I voted for. I didn’t vote for most of these people, but I voted for Obama, so I was interested to hear what he would say.”

She didn’t get that chance. The DNC revoked credentials for her and the other 823 volunteers on Tuesday morning, the day the official vote and nomination took place. All Sanders volunteers were barred from the convention, while Clinton volunteers were allowed in and seated.

“We’re all just so angry about this,” she added. “The campaign brought us into a room on Tuesday morning and said we wouldn’t be getting credentials. No explanation. It was like we were being sent home. We didn’t expect to be treated like this… many of us were crying.” 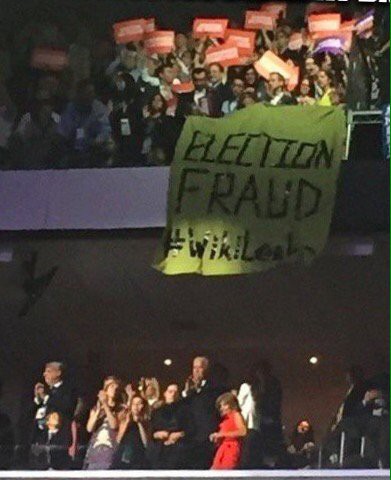 Official volunteers generally support the delegates during the week by keeping their phones charged, running paperwork, and fetching food and beverages during long days on the convention floor. Sanders volunteers were never given the floor credentials to actually do the job they were sent to do, and to make everything even more difficult, they were housed far away at Rutgers University in New Jersey.

“I was someone who came to the convention with an open mind. I was open to having honest conversations. But I saw the Clinton volunteers get VIP tours of the convention hall, and I saw us all get harassed and yelled at. And then to be sent home like this? I’m not going home happy, but I am going home. I just moved my flight to the red eye tonight. It’s just been awful.”

Berry will hardly be an ambassadors of party unity upon returning home.

Filling the Seats for Hillary

Tuesday night would have been a great night for the volunteers to be on the floor doing the job they were sent to do. That’s the night the votes were called out, and the night the Bernie Sanders delegates walked out of the convention in a “No Confidence” protest. Although Bernie controversially won the initial roll call vote in the morning, Hillary Clinton won the vote count in the evening and was nominated. The Sanders delegates promptly marched out of the convention hall, with a spokesperson for them stating their reasons. “We are the future of the Democratic Party, and we have no confidence in this selection process, no confidence in the primary election, and after the leaked emails, no confidence in the current DNC leadership.”

Estimates range widely as to how many of the delegates walked out. Evidently somewhere between 350, on the low end, and 1,000, on the high end, of the total 1,860 Bernie Sanders delegates felt the “No Confidence” protest was necessary and walked out. 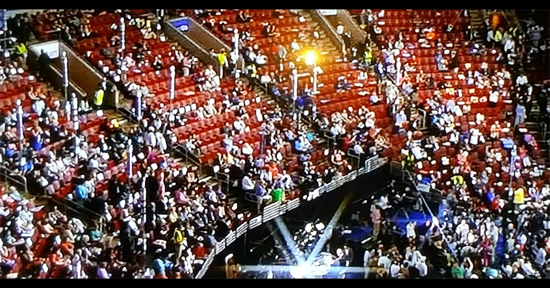 Not seen on TV: The convention empty after Sanders delegates walked out

But we never saw this emptiness on television.

This is because the Clinton volunteers were seated, and, according to many reports, additional people supporting Hillary were quickly dispatched into the convention as the Bernie delegates walked out.

“When we walked out,” said Baird, “we heard from people who stayed inside that the place was almost half empty. Then we heard that our seats were quickly being filled. When we returned, quite a while later, some of us found strangers sitting there, in our seats.”

It’s not yet clear who these “seat-fillers” are. Some have reported talking to them and learning that they’re just people off the street paid $50 per day to wave signs. According to other reports, they’re nearby college students or local Pennsylvania Democrats who support Hillary.

Angela Valdes, a member of the Bernie Sanders Oregon delegation and an official representative to the Credentials Committee, witnessed un-credentialed Clinton supporters getting floor credentials, after she herself was barred.

“A woman came up to me in the hallway outside the convention and informed me that she wasn’t an official volunteer, but that she was from the local DNCC and could supply water to our delegates,” Valdes said. “This woman made it clear she supported Hillary but could help us communicate with our delegates. She’s not even an official volunteer, and she has credentials to get down to the convention floor while I have to stay out in the halls.”

Valdes also witnessed seats being filled when the delegates walked out.

“When I was in the hall watching our delegates come out, surrounded by police, a group of nicely dressed college-aged people walked by, holding floor credentials in their hands. One said out loud, ‘I can’t believe we got these credentials!’”

Eden McFadden, a California delegate for Sanders explains more about the seat-filling phenomenon in this video, which takes us inside the convention.

While barring pro-Bernie speakers from the podium and reducing the pro-Bernie attendees in the seats have gone a long way to suppressing dissent at this convention, countless anecdotes of harassment and intimidation go even further in demonstrating that this convention has done little to bring Sanders and Clinton supporters together, and maybe was never intended to.

Angela Valdes recounted one of her experiences:

After they announced Hillary’s nomination, I walked over to use the restroom. An older man looked at me and saw my Bernie pins and said, ‘Ignorant bitch,’ as he passed by. I immediately went into the bathroom. Unfortunately I was attacked there too while standing in line. This time it was two older women who looked at me. ‘Why are you still here?’ asked one. ‘We don’t need you,’ said the other.

I told them I’m a Democrat and came to be part of this process. They told me again that they don’t need me. So I just turned and left the bathroom.

This morning, on the bus, it occurred to me that those who acted that way would be there again at the convention center. I’d probably walk right by them again. That man that called me an ignorant bitch really scared me.

My fellow Bernie delegation came to comfort me today in the hallway when I was having a hard time letting go of my fear. We in the Bernie delegation have bonded as a family, and they really helped me when I needed a friend and a safe space.

There have clearly been many more similar incidents. Paula Olivares, a Bernie Sanders delegate from Georgia, summarizes things from her perspective:

It’s just been disgusting inside the convention hall. So many of us feel silenced that many are wearing tape covering our mouths to show that we feel silenced. Our Bernie signs are confiscated, replaced with Hillary signs. And every single Bernie delegate and volunteer — everyone who I’ve talked to — has had some sort of negative encounter with Hillary supporters. We seek to understand them, to explain our position, and we’re just met time and again with insults, with cursing, with harassment, with ‘You don’t belong here’ or even ‘You’re racist.’

At this point we are all — most of the Bernie supporters I know here, even the ones who arrived open-minded —we’re basically all Bernie or Bust. I mean they’ve made it clear that we don’t belong here. They don’t want us here. They don’t even want to shake our hands. I had a woman refuse to shake my hand! We’re done, enough is enough, Bernie or Bust.

The DNC has repeated ad nauseam that this convention is a time for unity and for coming together. The corporate media has generally parroted and passed this narrative along to the nation as well.

The truth here in Philadelphia is very different.

The DNC has not tried to attain actual unity, but rather to suppress dissent to create the illusion of unity.

It begs this question: If indeed Sanders supporters have reached the “Bust” end of the Bernie-or-Bust dichotomy, has the DNC just sacrificed an actual chance to win in November for the illusion of a chance to win?