There Is a Moderate Republican in this Race, but She’s Running as a Democrat

Who is the real Democrat — Bernie Sanders or Hillary Clinton? Why are fringe candidates getting all of the attention this year? Who are the moderates?

These questions can all be answered by understanding something that has been unfolding for forty years: The center of American politics has shifted steadily to the right. Today neither party is even remotely similar to what it was when Bernie Sanders and Hillary Clinton, for example, first entered politics.

In the late 1970s, as large corporations turned into transnational giants, they pumped huge amounts of cash into the political system. This largesse lured, first, the Republican Party, in the 80s, followed by the Democratic Party in the 90s, and precipitated a rightward political shift as both parties rewrote their policies to compete for the same corporate contributions.

Before this, from 1932–1976, the Democratic Party as a whole was far more progressive. The issues and approaches advocated today by Bernie Sanders

were considered mainstream Democratic ideas by Franklin D. Roosevelt, John F. Kennedy, and Lyndon Johnson, and even many moderate Republicans. It was common to support strict financial regulation, liberal immigration, social services for the poor, and progressive tax policies. 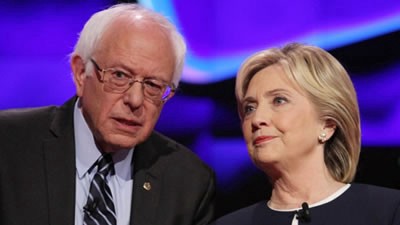 Which one is the Democrat?

Hillary Clinton’s stances, while fluid during this election cycle, are historically most in tune with classical Republican ideas, as advocated by Dwight Eisenhower, Richard Nixon, and others. As a young woman, she volunteered for the conservative Barry Goldwater, and while today she’s become liberal on some social issues, she’s generally at home with moderate conservative ideas, such as a hawkish military, strict immigration laws, reduced welfare, laissez-faire rules for Wall Street, and international business treaties that favor large corporations. One group started a petition this year asking Clinton to run as a Republican, suggesting that while she is “liberal on some issues, on a wide range of important issues she lands squarely as a moderate conservative.”

As for the Republican candidates still running in the primary this year — Donald Trump, John Kasich, and Ted Cruz — they are all to the right of Goldwater, and they would have been considered unelectable extremists and distant outliers on the spectrum before 1996.

The steady rightward shift of American politics, before Bernie Sanders

The Rise of Bernie Sanders

Without Bernie Sanders, we would have the political spectrum above. Hillary Clinton and the conservative wing of the Democratic Party have moved rightward into a corporate centrist (neoliberal) position. This position has a certain amount of flexibility on social issues but adheres strictly to unregulated capitalism and favors international trade deals that benefit large corporations rather than domestic jobs, the environment, or fair wage or labor standards. The Republican Party has shifted to the right too, towards policies that benefit no one but the ultra-wealthy and the largest transnational corporations; they cloak their goals in racist or evangelical language to appeal to voters, but their regressive policies generally aim to restrict or even cancel laws and rights won by the working classes in earlier eras. 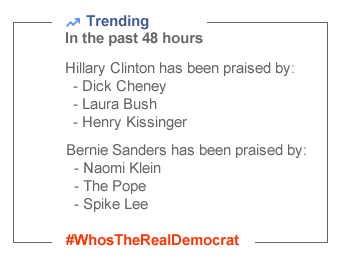 This rightward drift has pushed the “center” to a spot between Hillary Clinton and John Kasich. This “center” is to the right of even Social Security, abortion rights, labor unions, and quality public high schools. With that “center,” Republicans who wish to be considered “strong conservatives” compete for ground far out to the right, where little civic sanity is left. With that “center,” true progressive issues are never even discussed.

The arrival of Bernie Sanders heralds a potential rebalancing of the spectrum:

Bernie’s policies appear to us to be radical and unusual only because the Democratic Party has moved so far to the right since he entered politics. In 1970, universal healthcare, peace, and a livable minimum wage were bread-and-butter down-the-middle planks of the Democratic Party platform.

What We Are Voting On

Therefore in 2016 we are voting not just for a candidate, but for the very political debate we want to have over the next two decades. I support Bernie Sanders not only because he’s right on the issues I care most about — climate change, campaign finance, income inequality, racial justice, and militarism — but because electing him will reestablish the left in our political discourse for a generation.

Resetting the spectrum will restart an American political discourse where the left and right are more balanced representations of classical liberal and conservative thinking, and where racist reactionaries are no longer considered American thought leaders. This will enable action on pressing issues like the environment, campaign finance, and livable wages.

If Hillary Clinton wins the nomination, her victory will push our political center further right and normalize a crazy cadre of right-wingers as the holders of modern American conservatism.

If Bernie Sanders wins the nomination, his victory will be a genuine win for the American political left, but more importantly it will reset our political discourse and pave the way for sensible debate on the most important issues of our time.