The Debate of Election 2016: To Surrender or to Protest 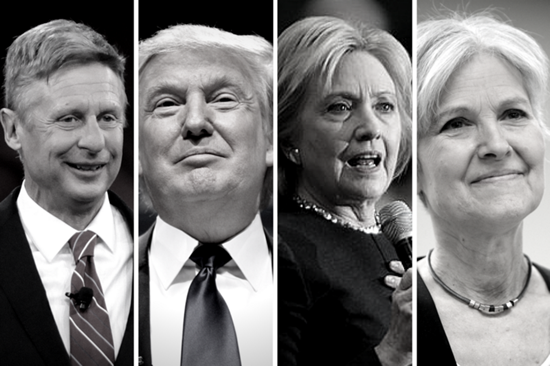 Outlook on the day of an illegitimate presidential debate.

The problem with accepting today’s debate as a legitimate democratic event is that to do so would be surrender. In fact, accepting this entire election, as currently run by the two corporate parties in collusion with the corporate media, would at this point be surrender.

The debates are illegitimate because three-quarters of Americans want more candidates in the debates, and Jill Stein and Gary Johnson were barred via disingenuous rules and flawed polls. There is no legitimate reason the debates should be run as the two older parties see fit, rather than how we the citizens see fit. Yet that’s what’s happening.

The debate will be illegitimate also because it seeks to force us to accept primaries that were a sham.

Those who followed the primaries closely know that the Clinton campaign and the DNC lied, cheated, and stole their way to the nomination. Several prominent media pundits do argue that the primary was fair, but the endless and ongoing leaks of internal emails continue to show that the primary was rigged. Now even the DNC itself, after insisting for months on its impartiality, is arguing in court that everyone knew all along that they, the DNC, favored Clinton.

Trump, on the other hand, employed the worst tactics of demagoguery — inciting violence, racism, jingoism, and actual political ignorance—to win the nomination on the Republican side.

Both candidates of course do have some shred of appeal. Clinton is a woman and has a few progressive ideas she might not abandon; Trump at least verbally understands that corporate neoliberal deals like NAFTA are what have robbed much of this country’s working classes of decent jobs.

Support as Surrender or Protest

But neither candidate has anything approaching positive approval ratings because neither is even remotely committed to what the country actually talks about, wants, and needs: restoring democracy through verified elections and reduced corporate funding; improving the economy via fair trade deals, living wages, and a green new deal; aggressive action on climate change; ending for-profit prisons; ending for-profit wars; ending racist policing and police brutality; ending Orwellian spying on all citizens; modern single-payer healthcare; a carbon tax to spark a fully green economy; breaking up big banks to fund education.

Supporting Clinton or Trump entails surrender, first, about these core issues, and, second, about the flawed and corrupt system itself that is forcing Americans to choose between “evils” during the one and only national political campaign we have every four years.

The problem with supporting and voting for Jill Stein — who supports a truly intelligent set of solutions to the problems facing the country and planet — is that the electoral system, the corporate media, and the parties are all rigged to prevent her from registering in the polls, on ballots, or in the media. Supporting her amounts to protest.

Thus the choice in Election 2016 at this point is between surrender and protest. And the choice whether to accept this illegitimate two-candidate debate is the same: to surrender or to protest.

In my experience, supporters of Trump and Clinton who don’t believe their support is surrender are mostly either uninformed via undiluted consumption of corporate media, willfully ignorant for (possibly healthy) psychological reasons, attached to their candidate’s small shred of appeal, or just don’t have the time in their busy lives to think these crucial issues through.

Supporters of Stein and Libertarian Gary Johnson who don’t believe their vote will be a protest vote are mostly either uninformed or willfully ignorant for (possibly healthy) psychological reasons of the flawed system whose purpose is in part to keep their support and their candidates out on the margins.

I write this on the day of this debate to say that I believe the wisest, patriotic path forward is to vocally declare that this is not a legitimate presidential debate.

As Americans, we must continue to demand democracy, as our predecessors have, and as citizens of countries around the world are doing every day. We must inform ourselves and each other about the corruption of our two older parties and about the possibility of building a new party. We must read and understand election fraud and the state of our democracy. Then, with open eyes — and with patriotic awareness that abolitionists and suffragists and civil rights activists who preceded us fought against greater odds — we should choose to cast our surrender or protest votes.

And then we must acknowledge that much more than voting is needed to get our country and planet on track to a sustainable future for ourselves and our children.