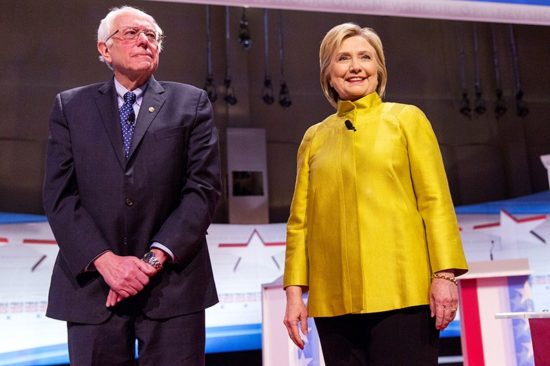 Some people say Bernie Sanders and Hillary Clinton are approximately the same on the issues. These people likely have a lifestyle and a level of income that is comfortable and that they’re not too worried about losing.

For middle class and working class people, many of whom struggle from paycheck to paycheck and carry debt, the policies proposed by the two candidates are nothing alike.

Given the power of an incumbent president, and the fact that most of our last presidents have been reelected, if we end up with Hillary Clinton in the White House, we’ll likely have her and her essentially status quo policies for eight years, not just four.

Bernie Sanders’s proposals, many of which are quite bold, are not all guaranteed to be immediately implemented of course, but Bernie has a long track record of tenacity and passing progressive legislation even in Republican-controlled legislatures. We know he will fight

for his proposals for his four — or eight — years in office, and with the power of the presidency his success shouldn’t be underestimated.

So who’s going to be just fine with eight years of Hillary Clinton, and who’s likely not going to be able to afford it?

For Many It Would Be a Worsening Struggle

If you’re getting paid minimum wage or anything close to it, you might not be able to afford eight years of Hillary Clinton and the status quo. She has said recently she supports a $12 minimum wage, but she doesn’t advocate for it with much commitment. Bernie Sanders promises at virtually every campaign stop that a $15 “living wage” will be one of his top priorities upon becoming president.

If you’re trying to figure out how to pay for college, you might not be able to afford eight years of Hillary Clinton. Hillary advocates for low-interest loans for college students — essentially the current policy — with a very difficult tax burden falling on students after graduation and repayment. Bernie proposes completely free tuition at public colleges and universities.

If you’re trying to obtain healthcare coverage, purchase prescription drugs, or deal with a serious health issue, you might not be able to afford eight years of Hillary Clinton and the status quo. Bernie proposes universal healthcare as a right, rather than as a privilege that you have to pay a corporate healthcare company for, and he advocates obtaining lower prescription drug prices via importation and negotiation.

If you’re African American or hoping for police reform and a reduction in the mass incarceration and “modern slavery” system, you might not be able to afford eight years of Hillary Clinton and the status quo. She has a private prison lobbyist running her campaign. Bernie is a forceful advocate for holding police who break the law accountable, and he promises to reduce punitive incarceration and break the prison-for-profit “modern slavery” system.

Who Else Might Not Be Able To Afford It?

If you’re living in Syria or Iran and hoping for no additional wars launched, sanctions enacted, or “no fly zones” enforced, you might not be able to afford eight years of Hillary Clinton and the status quo. You might not even survive.

If you’re hoping for a long and healthy life on Earth for yourself, your children, and your grandchildren, we as a society might not be able to afford eight years of a status quo that includes burning fossil fuels extensively and fracking for more. Only Bernie supports a Carbon Tax, universally recognized as the only effective way to use capitalism to swiftly reduce environmental degradation.

If you’re hoping to save money and build wealth via investments or a home purchase, you might not be able to afford eight years of Hillary Clinton and the status quo. She has financed virtually her entire run for president with Wall Street money, so there is no sensible chance she will regulate the banks sufficiently to prevent another financial crisis. Bernie accepts no Wall Street money, promises to break up the biggest banks that colluded to bilk the American people for billions, and pushes for a reinstatement of the Glass-Steagall law to prevent future financial crises.

In order to become president, Bernie Sanders or Hillary Clinton will have to beat the Republican nominee in November. There are three key indicators for determining which candidate is more likely to win the general election.

All key indicators show Bernie Sanders will win the general election, possibly in a landslide. He’s the most popular politician in the country right now. Hillary Clinton would be in a tough fight and might lose to the Republicans.

If you are privileged enough not to worry about the status quo, perhaps you should consider the situation of others when you vote in this very important primary election.

This article also appeared at:
Share:
Posted in Peaceful Revolution | Politics
by Tony Brasunas on March 30, 2016