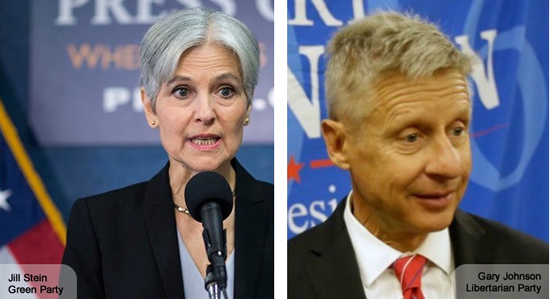 The Democratic and Republican parties aim to exclude Jill Stein (G) and Gary Johnson (L) from the debates.

Millions of American voters will remember this 2016 election year as the year they left the two older political parties once and for all. After deeply problematic primaries, including epidemic fraud on the Democratic side, the two parties nominated the least-liked candidates in history. Never in modern politics has a candidate with either Hillary Clinton’s approval rating (-16) or Donald Trump’s approval rating (-18) won a nomination, let alone the White House. These two candidates are widely, historically disliked.

Meanwhile three-quarters of Americans want to see two other candidates in the presidential debates. You can’t find a lot of things that three in four Americans agree on, but polls show a stunning 76% of us want Dr. Jill Stein, nominee of the Green Party, and Gov. Gary Johnson, nominee of the Libertarian Party, to be included in the debates.

Not that this should be surprising. With our democracy fraying, corruption and election fraud on the rise, climate change encroaching on virtually every ecosystem, and income inequality at record levels, it’s a crucial juncture for the United States and for the planet. Citizens of all backgrounds long to hear a broad range of ideas before determining the optimal path forward. 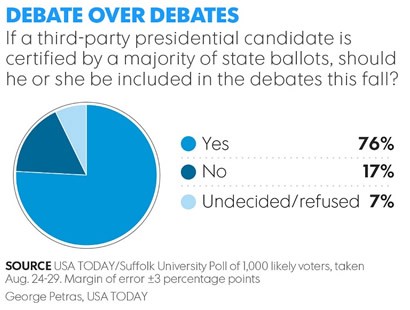 Americans want to see Stein and Johnson in the debates.

With climate change a leading issue for many voters, the Green Party, which pushes for immediate action on climate change, should be heard. In light of revelations about domestic spying from whistleblowers like Edward Snowden, American citizens want personal liberty and privacy right now, and for this reason the Libertarian candidate should be heard as well. The two older parties inspire little trust on these 21st century issues.

Presidential campaigns are the only nationwide campaigns we have as a country. These political seasons are the most important avenue for large scale political exchange, inspiration, and expression.

For all of these reasons, three in four Americans want inclusive debates.

High Stakes Games with no Referees

But the two older parties aren’t interested in sharing the stage with the younger parties. In the words of one-time Georgia House Majority Leader Larry Walker when opposing a law that would have made it easier for new parties to gain ballot access in his state: “Why should we encourage our own competition?”

Walker’s words are an outrage to some — his reasoning has led to repression in other countries — but from one perspective his response makes sense. There is a reason sports leagues hire professional referees. In a competitive environment, you don’t ask players or contestants to “encourage their competition.” You task and pay qualified neutral people and organizations to make and enforce rules.

Today our presidential debates are organized and run in an eminently self-serving way. The leadership committees of the two older parties — the DNC and RNC — run things as they see fit, controlling a private corporation called the Commission on Presidential Debates. Under their watch this corporation has become adept at choreographing debates so as to appear to foster open discourse while actually excluding candidates, ideas, and open discussion. The current heads of this corporation are two longtime party insiders: Frank Fahrenkopf, former head of the RNC, and Mike McCurry, former Clinton White House press secretary. Fahrenkopf, the more visible of the two, went on the record this week saying that he doesn’t favor including third party candidates or softening the rules that exclude them. His words surprised absolutely no one.

“Perpetrating Fraud on the American Voter”

It wasn’t always this way. Our presidential debates used to be organized by the League of Women Voters. The League earned a reputation for fairness, for including independent candidates, and for holding debates that were actually compelling to voters.

But in 1988 everything changed. A memorandum surfaced indicating collusion between the Democrats and Republicans just before these two parties sent the League a hefty document precisely specifying how to hold the debates that year — right down to the questions, the moderators, the heights of the podiums, the journalists who received access, and even the composition of the audiences. The parties were acting together in an attempt to turn the tables on the League and take control of these public, democratic events.

The League refused to be bullied this way, and they famously withdrew their support for the debates. “The demands of the two campaign organizations,” the League said in a statement, “would perpetrate fraud on the American voter.”

“The League has no intention of becoming an accessory to the hoodwinking of the American public.”

Strong words, but the parties were unfazed. Rather than continue with standard, open debates, the two parties left the League of Women Voters behind; the parties got together on their own and set up a corporation they named the neutral-sounding Commission on Presidential Debates. Triumphantly they predicted that they wouldn’t seek or be forced ever to allow other parties to participate.

Four years later, in 1992, Ross Perot was included in the presidential debates, and the two older parties went a step further to exclude independent candidates. They set up rules that have successfully prevented candidates other than the two official nominees of their parties from taking part.

As a result we have bipartisan — not nonpartisan — debates. The corporation has successfully prevented alternative voices from being heard by the American public during our country’s national campaigns.

The trick for the parties was coming to bipartisan agreement about the best way to exclude candidates: media polls.

This year the presidential debates will again be organized by Mr. Fahrenkopf’s corporation, using a specific formula to exclude parties and candidates. In order to participate, a candidate must poll above 15% nationally in five media polls that the corporation chooses.

On the face of it, this sounds reasonably fair. 15% seems like an attainable level of support if a candidate hopes to eventually win the election, and voters understandably don’t want just anyone to appear on the stage.

It sounds fair in theory, but it has proven absolutely exclusionary in practice.

The first problem, obviously, is that it allows the two parties themselves, through this corporation, to choose which polls are used. The two parties can simply find one single poll that shows less than 15% support for a candidate, include that poll in their five, and thereby exclude the candidate.

There is absolutely no one with any power in this game advocating for inclusion.

Worse, these rules set up an insurmountable chicken-and-egg problem for anyone not already covered extensively in the media:

The 15% polling requirement for debates actually isn’t arbitrary; it’s deliberate to keep competition out of the debates. #GreenPartyForum

There’s even a bigger issue with giving all the power to the media corporations, and then letting them double as the deciding polling organizations as well. They skew their polls.

Lee Camp explains in the segment below of Redacted Tonight how the polls that the debate corporation has chosen are obviously and deliberately wrong. One poll, for instance, barely sampled independent voters, an unforgivable oversight. Another poll didn’t include a single person under the age of 35! You can’t make this stuff up.

The other polls generally ask their questions in ways that steer citizens away from expressing support for the Green Party or Libertarian Party candidates and towards saying the name of one of the older parties’ candidates.

Now, what I’m doing here — critiquing polls and corporations — is media criticism, and of course the media isn’t saying these things about itself. Lee Camp is a comedian who does a powerful weekly news show, delivering essential national stories that no one else seems to touch. Think Jon Stewart meets George Carlin.

Lee Camp starts with a joke, then dissects the polls used to disqualify Green and Libertarian nominees from debates.

It’s important to remember that Stein and Johnson must poll above 15% in all five polls that the debate corporation chooses. So if just one poll happens to forget to ask independents, say, that’s enough. But they’re not taking any chances, as many polls are apparently rigging their questions and results.

Is There a Better Way?

Should we organize debates that are more inclusive and fair? Could we allow all parties a chance to speak to voters?

Why yes, there is a simpler and less biased method to determine which candidates appear in the debates. It is the method proposed by most writers and leaders who contemplate this question, and it’s not only easy and simple, it actually rewards participating in our democratic institutions rather than colluding with corporate media.

This is it: We allow into the debates the nominees who will appear on enough ballots around the country to win the election.

Each state has its own rules for ballot access, and while some of those rules (like Georgia’s) are unreasonably burdensome, they are manageable. These rules don’t discriminate nearly as much as the corporate media.

After tireless work by thousands of enthusiastic Jill Stein supporters, she will appear on 45 state ballots and be eligible as a write-in in 3 more. Gary Johnson will appear on even more ballots — 49 state ballots. Many states require onerous paperwork and thousands of signatures for ballot access (this is another way the two parties devised their “two-party system” to prevent other parties from participating). Since that paperwork is in order and those thousands of signatures were gathered and duly certified by the states, these candidates should be heard in the debates.

This method would suffice for determining who to include in the debates. As for the debate rules, questions, heights of podiums, moderators, and composition of audiences, it seems obvious that — as with any other contest — we should have neutral rules makers. We should have a nonpartisan debate commission.

Ultimately our nation’s presidential debates can be and should be the showcase of our political system. These debates are the precious hours set aside by and for citizens nationwide so that we all might hear our candidates in person — not filtered through the media — as they debate and discuss crucial issues, challenge one another, present to us their accomplishments, and account for their mistakes. The debates should first and foremost be organized to enable citizens to be informed and intelligent when they undertake the solemn act of voting.

Ever since a private corporation took control of the debates in 1988, we have had choreographed events rather than debates — spectacles, first and foremost, organized to exclude ideas, exclude candidates, and convince people to vote for one of the two older parties’ candidates.

To restore faith in our democratic institutions and to pave the way for powerful and intelligent debate on our nation and planet’s most pressing issues, our presidential debates must include all candidates who can potentially win the election, and they must follow rules devised by nonpartisan organizers. There are numerous lawsuits to create exactly this kind of debates. For the good of our nation and for the future of our representative democracy, please speak out, support these lawsuits, and never settled for spectacle over substance.