We Have a Cover, We Need a Quote

The results are in! To all of you who voted in the poll, thank you so much for sharing your thoughts.

It turns out one cover won both polls — the public poll I held here on the blog, and a smaller informal poll I carried out with two dozen people in the publishing industry.

And the winner is…

The cover that features a photograph shot in Tiananmen Square…

The cover that depicts the political events in Chapter 7… 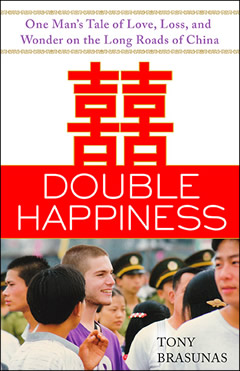 So, yes, this is the cover I am refining and enhancing now with my cover designer!

The truth is, this choice was one of the hardest I’ve had to make during this entire journey to publication. It isn’t easy to choose a single image to represent an entire book. A proverb suggests that a picture is worth 1,000 words, but like many books, Double Happiness has over 100,000 words! At first, I was split, and favored another cover, the one listed as #5 on the poll.

But I’ve come to like this one far more over the last month. I find it bold and iconic, and it manages thematically to balance depictions of both a sedentary and a peripatetic traveler (me), a narrator who is neither just a backpacker on the roads, nor just a teacher in a classroom. I’m a young man, adventurous and curious in a changing China. It also looks great in thumbnail, which is how people who shop online for books these days see the cover first.

Not far behind, taking second place in both polls, was the cover that appeared as #3 in the poll. That cover has a lot of appeal to me, too, and I know it did to many of you as well, and it is now the leading candidate to be featured on the back cover of the book. It’s a beautiful and elegant image. The issues with #3 are that it doesn’t provide quite as iconic a cover, in my opinion, and that it depicts the book as perhaps solely a story of backpacking, when in fact nearly half of Double Happiness takes place in Guangzhou where I am a teacher in a high school.

Yes, the cover is getting there. One final question for you, if I may:

Are you, or do you know, an author or a book reviewer who might be interested in reading or reviewing Double Happiness now, with the possibility of a quotation of theirs appearing on the cover?

I would be delighted to communicate with them about any terms they might have. I have one quote ready for the cover and would love to add another.

A final time, my gratitude! Thank you so much for your thoughts and contributions. These are exciting times, and Double Happiness will be in the world very soon.

Share:
Posted in Uncategorized
by Tony Brasunas on October 16, 2013