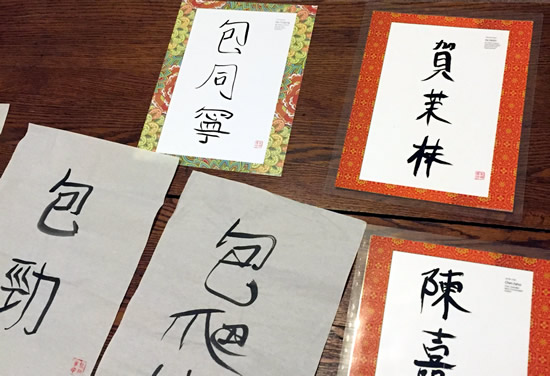 Trying something new is a humbling experience. It’s also one of the ways we feel alive. The “beginner mind” we experience when we do something for the first time is a combination of the pleasure we get as our brain wires new neural pathways and the awkwardness our body feels doing something new.

I recently tried Chinese calligraphy, and it was an intimidating and sublime experience.

I’ve been writing Chinese characters — at least occasionally — ever since my first Mandarin class at Amherst in 1994. But calligraphy is a different animal entirely.

In China, calligraphy is truly a revered art form, a practice of creating beauty that is as highly regarded as painting or music. Great calligraphers throughout Chinese history have become famous throwing themselves into painting poetry with strokes that evoke the full range of human emotion.

I was after a more modest goal. I wanted to create name posters for some of the early supporters of Double Happiness. 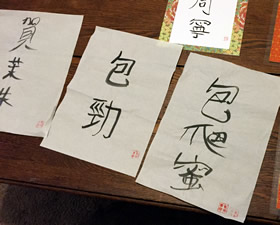 First, I devised a name for each person I wanted to honor. I chose common Chinese last names and beautiful or sonorous (at least to me) first names. With the names ready, I was then ready to begin writing.

Well, first I had to acquire a basic set of tools, known grandly in China as the Four Treasures of the Study (文房四寶): an inkbrush, an inkstone, an inkstick made from solidified soot, and high quality unproccessed paper.

Once I had my Four Treasures in hand, I made a pot of my favorite green tea and set up at our dining room table with my new tools. The first thing to learn was how to grind the inkstick against the inkstone and mix in water to get the right consistency to create ink. It took many attempts. When I finally had what seemed to be a decent consistency to the ink, I dipped the brush in and made my first clumsy strokes on the paper.

Suffice it to say I made countless attempts to write each name, going through over 200 sheets of paper in total. But for an hour there, with the house silent around me and the fragrant tea beside me, I felt like a Chinese sage somewhere near Hangzhou, in the 1100s, practicing an ancient art and following a solitary

Confucian stoicism. At least I could imagine it for a moment.

I suppose trying something new doesn’t only make us feel alive. It also expands our mind just enough to show us a new way humans experience being alive.

When I had a version of each name that I liked, or at least that my inner perfectionist didn’t hate, I stamped my name seal (姓名印) on them and scanned them into my computer. There I used some slightly more modern skills to design and create laminated versions as gifts.

Share:
Posted in Double Happiness
by Tony Brasunas on January 30, 2016