This Election is the Perfect Storm for a Party: Jill Stein and the Green Party 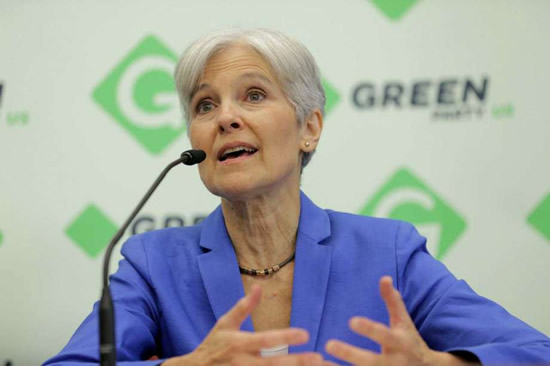 Voters seek alternatives to the ‘choice’ between Trump and Clinton

The year 2016 is going down in history as the year the majority of American voters turned against both of the major political parties.

This year will also go down as the year a new political party spread its wings.

The Republican Party, once the “Party of Lincoln,” the party known as the Grand Old Party (GOP), has chosen an awful candidate in Donald Trump, a racist, sexist, failed businessman and television star famous for mean-spirited diatribes. Trump mocks the political system he seeks to preside over, evokes xenophobia at every turn, and calls for violence at political rallies. He is widely reviled by those who take him seriously and harshly ridiculed by those who don’t. He seems to be an awful choice for president by virtually any measure, and he might not even really want the job.

The even older Democratic Party, once the party of Thomas Jefferson and Andrew Jackson, has also chosen an awful candidate in Hillary Clinton, a dishonest, corporate-controlled warmonger married to a former president who was impeached for dishonesty. As Secretary of State, Clinton has amassed millions via her private Clinton Foundation by sending billions of dollars in weapons to warring countries around the world in exchange for donations. Her misuse of private email servers to handle state business and classified information has resulted in scandal after scandal and leaves it unclear whether she even qualifies for basic security clearance. She seems to be an awful choice for president by virtually any measure, and she might not even qualify for the security clearance for the job.

People in this country and many around the world are amazed and horrified that these two ridiculously bad candidates are supposed to constitute “democracy” in the most powerful country on earth. Many wonder how this can even be called a choice. These two candidates support the same wrong side on so many of today’s most pressing issues.

But all is not lost. What many view as an illegitimate choice comes at a time when both the United States and all of Planet Earth badly need an honest accounting of the issues that confront us. Collectively, Americans need real leadership to address these
critical issues, and in this year of worst-ever candidates, worst-ever internecine party politics, and worst-ever bias within the primary system, there is a silver lining.

A new party is spreading its wings. When compared to the two old and increasingly disliked parties, the Green Party is a youngster, but people of all political stripes are desperate for new options. The Green Party is young, capable, dynamic, and committed at its core to some of the most important issues of our time.

Thousands of people who are paying close attention to this election have already shifted to the Green Party, idealists and pragmatists alike. The Libertarian Party also has its appeal and is growing this year. With young people, the departure to these other parties is most stark. According to a recent Quinnipiac poll, 62% of young people are considering voting for either the Green or Libertarian candidate. Let’s say that again: Nearly two in three people under the age of 35 are ready to vote for someone other than the Democrat or Republican. Many media polls are rigged to prevent this exodus to the Greens and Libertarians from being seen. In one poll, CNN famously replaced the term “third party” with “undecided” in an attempt to mask the increasing numbers of people leaving the two corporate parties. These are transformative times.

“You never change things by fighting the existing reality.
To change something, build a new model that makes the existing model obsolete.”
― R. Buckminster Fuller

Independent voters outnumber Democrats and Republicans by a widening margin. This largest bloc of voters doesn’t particularly like either of the older party. In many ways, the so-called “two-party system” is the very reason our democracy itself is reviled and avoided by so many Americans: The two old parties claim to want to increase voter participation, but they themselves are the reasons many voters aren’t voting. The more one observes the two older parties and their increasingly similar corporate approach to issues, the more one realizes that this “system” is the primary reason Americans do not enjoy the healthcare, education, labor rights, vacation time, and family leave that the rest of the developed world enjoys. This “system” is also frustrating a widely-shared longing to aggressively combat climate change. Instead, the two “granparent parties” have created — and modified — the “system” to make it theirs alone and expressly to prevent any other party from participating.

For millions of American citizens, the presidential debates present a pitch-perfect illustration of this. The debates should be the showcase of our political system — hours set aside for citizens to hear their candidates debate and discuss the crucial issues, so that they can vote wisely.

Instead we have awful, stage-managed events that exist transparently to exclude ideas, exclude candidates, sell advertising, and, most of all, convince people that they have to vote for one of the two candidates put forth by the grandparent parties. The debates aren’t even hosted by a nonpartisan group anymore, as they used to be. Today they are hosted by a bipartisan corporation that represents the corporate interests of the two corporate parties.

But this year, with the power of the internet connecting and informing people across the nation and planet, this unflattering facsimile of democracy perpetrated by the two older parties no longer fools a majority of people. Increasingly everyday Americans see the Republican Party as hopelessly backward and out of date, and the Democratic Party as simply too corrupt to be entrusted with the country’s future.

The Present and Future are Green

The Green Party on the other hand, like Bernie Sanders, provides a compelling, insightful, and honest accounting of the issues that confront our country and planet in a way that resonates with people across the spectrum. Jill Stein, the Green Party nominee, is an eloquent and brilliant leader who calls out the root causes of the pressing issues at a time we cannot afford to fool ourselves any longer.

Climate change and global warming are upon us, no longer worrisome trends for scientists to argue about; if we don’t act aggressively now we likely will pass the point of no return on the rising of the global temperature. Wars that are spiraling out of control will only worsen with climate change and refugee crises.

Jill Stein calls for a “World War II-level mobilization to transition our entire energy system to renewable energy by 2030.” She calls this the #GreenNewDeal. This is the right path, according to virtually all scientists, and we have the technology today to power this country with wind and solar alone, even without the technological advances sure to come if we invest in the transition heavily. Moreover, a Green New Deal will employ millions of Americans and solve the crisis of poverty in our country while also positioning the country as a leader in renewable energy technology and manufacturing for years to come.

The oil, gas, and coal corporations, of course, don’t want things to happen so fast. The infiltration of corporate money and power into government is the root cause of not just corruption, for-profit wars, and for-profit prisons, but also of our absurdly slow response to global warming. This corporate corruption is also the root cause of our inability to address in a meaningful way domestic issues such as racist policing, universal healthcare, quality education, and paralyzing student debt. The Green Party powerfully addresses this encroaching corruption in a way the two grandparent parties simply cannot, because they themselves are primary conduits of this corporate power infiltrating our public government. These two parties’ leadership committees — the DNC and the RNC—have become utterly committed to entrenching this corporate power, as this is the power that entrenches their own.

Many rank-and-file Democrats and Republicans, on the other hand, aren’t interested in perpetuating corporate corruption; voters and local officials will leave for better parties when they’re not afraid that their votes won’t count or that their careers will end if they do.

In this town hall event, Jill Stein and her running mate, Ajamu Baraka, present coherent, compelling, and honest appraisals of the challenges that face us. It’s worth watching. And it’s worth noting that this town hall event happened on CNN, a network that for years has notoriously ignored the Green Party. Perhaps even the corporate media smells the winds of change.

Anyone skeptical about the Green Party’s immediate potential to organize, lead, and win, should simply consider Bernie Sanders’ historic campaign. The Sanders campaign again and again defied corporate media pundits and their tendentious criticism. Sanders raised more money, attracted more enthusiasm, and drew more people to political rallies than anyone in a generation — and this was with virtually no media coverage and inside a political party actively trying to stop him.

As many have pointed out, Sanders likely won the primary and defeated Clinton, but election rigging, outright fraud, and party favoritism approaching the ridiculous gave the nomination to Clinton. Thus Bernie is not the candidate for the Democratic Party this year, which likely spells the beginning of the end for the Democratic Party with millennials.

Yes, the Democrats could stop Bernie Sanders by simply rigging their primary, but they cannot stop Jill Stein and the Green Party the same way. The Green Party can make up what it lacks in history and entrenched leadership with the full commitment of its energy and shared vision. The Democratic Party, we now know, in order to please its billionaire sponsors, spends much of its energy actually opposing progressive issues.

Sanders succeeded not by triangulating on issues, or by holding “private” and “public” views on things like the TPP or climate change. He connected with millions upon millions of people by unapologetically articulating progressive views and values, by speaking the truth about corporate corruption, and by calling forth the possibility of a moral, progressive future for our country and our planet.

The candidate and party that connect with voters on these issues is the party inheriting the Bernie Sanders fundraising, volunteering, and voters. Jill Stein rightly points out that her campaign is the only one promising to invest in the economy by cancelling student debt via the quantitative easing used to bail out Wall Street. If only the 44 million people currently in student debt vote for her, she’ll win the election.

Indeed, unless there is election fraud and rigging of the media polls, there is no reason Jill Stein won’t be able to build the Green Party into the biggest party in the country — and win the presidency in November.

Even if she doesn’t win, if the Green Party merely exceeds 5% of the vote, they’ll win national ballot and financial status as a party. Either way, this catastrophe of an election will have been the perfect storm that wrecked the two-party system and built a new national party.