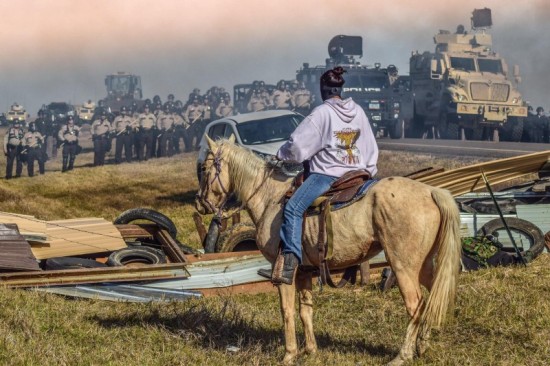 When one young woman, Sophia Wilansky, had her arm blown off by a police grenade, all the independent media and all the eye witnesses there in North Dakota confirmed that this was the result of police brutality, of use of a combat weapon, maliciously, up close, on a woman peacefully exercising her constitutional right to assemble.

The next day the Times — without a reporter on the ground — printed a story that muddied the waters. The Times story ran abundant quotes from police spokespeople, and the article ultimately concluded something like, “Well, hey, we just can’t really be sure what happened there.”

This is serious and disingenuous propaganda. Their strategy was to “balance” the truth with lies from the police department. And they didn’t do any real journalism of their own. Their conclusion wasn’t presented as opinion but as fact.

Here is the Times piece, as well as one of the many independent media articles covering the same grenade strike on Wilansky:

Cause of Severe Injury at Pipeline Protest Becomes New Point of Dispute
Sophia Wilansky, 21, who grew up in the Bronx, rested in a Minneapolis hospital bed, her father by her side, recovering…www.nytimes.com
Statement by Father of Sophia Wilansky, Critically Injured at NoDAPL Action
Editor’s note: Water protectors were violently engaged by police on Sunday November 20 when they tried to clear a…indiancountrytodaymedianetwork.com

Realizing the bias of the corporate media doesn’t necessarily leave an easy answer as to how to be best informed about pressing issues in the news. Ultimately the lesson is that we need to read as widely as possible — both independent media and corporate media — and hone our own truth radars and bullshit detectors. We don’t have to read everything, but we should read different things different days of the week, to balance our media diet. As we do so, we’ll begin to listen not just to what is said, but to who is saying it, and in doing so we will begin to think for ourselves more and more deeply. This is happening, and this is part of the political revolution in our country right now.

Before we turn to the state of the Democratic Party, here is one source to add to your media diet. Jimmy Dore, an independent media journalist, interviews Baltimore Sargent Michael A Wood Jr., on the thousands of military veterans on the move to protect and defend the Water Protectors at Standing Rock. Consider whether this is a perspective you have heard anywhere in the corporate media.

Why the Democratic Party stays silent

While Jill Stein and Bernie Sanders have led by example, visiting Standing Rock, speaking out, and calling for protection and solidarity with the thousands of Water Protectors there in North Dakota, the leadership of the Democratic Party has been silent, absent, and, thus, for all intents and purposes, accessories to the crimes.

Why have Barack Obama, Elizabeth Warren, Chuck Shumer, Hillary Clinton, and the rest of the leadership in the Democratic National Committee (DNC) been so silent and done so little while militarized police attack peaceful people?

Lifelong Democrats may have to remove a pair of rose-colored glasses to read further, but the answer is clear.

The leadership of the Democratic Party — just like the Republicans, unfortunately — are heavily on the take. Some Democrats accept campaign contributions that are essentially personal bribes from the banks and fossil fuel corporations that stand to profit from ecological nightmares like the Dakota Access Pipeline. This is bad enough. But the deeper problem is that the DNC has led the Democratic Party to a place where it no longer actually supports working class people and no longer stands on the right side of issues like this. Democrats don’t do the right thing because they believe they can’t. Their party leadership has made them addicted to these corporate mega-contributions to run their elections and to pay their consultants. They do not oppose Standing Rock for the same reason that they did not allow Bernie Sanders the presidential nomination — because doing so might lead to a reduction in the money they receive from large corporations.

The Republicans, with few exceptions, are worse. And that’s the problem. The Republicans will nearly always be worse, more craven, more likely to take a bribe and do a transnational corporation’s bidding, so the Republicans receive even larger sums from the same large corporations.

Thus, the Democrats’s strategy is a losing strategy. They have been cornered; they’re losing. It’s as if the DNC has signed up to play hand after hand with 2–1 odds against. Democrats don’t significantly distinguish themselves from Republicans on policy, and yet the Republicans will still raise more cash every time. Thus the Republicans will usually win.

The Democratic Party has signed up to play a losing hand.

Michael Sainato covers this state of affairs well in Counterpunch:

Buying Silence: Why So Many Democrats are Mute About Standing Rock
After weeks of calling for the United States Government to provide the efforts of water protectors at Standing Rock to…www.counterpunch.org

Bernie Sanders demonstrated the alternative strategy: Raise money from people, not corporations, and run hard on genuine policy, unapologetically standing for the needs of everyday people and the most important issues confronting the country and planet.

If the Democratic Party can’t change on its own, if it cannot credibly run on actual policy that favors working class people — and evidence indicates that party leadership is variously too ignorant, cowardly, or corrupt to make this transformation — they will keep playing this game rigged with 2–1 odds against them, and they’ll keep losing state and national races.

Therefore we the people must build up an alternative party. The Green Party is strong and getting stronger, and we should all support it.

We must also keep standing and fighting outside the party system, at places like Standing Rock, since the electoral system is rigged in many ways against progress and inclusion.

And those of us who choose not to leave the Democratic Party must radically clean house to reform it from within and facilitate a transformation in its approach to both policy and campaign funding.

For now, it’s no mystery why Democratic leaders don’t stand with Standing Rock. They don’t want to shake the boat, even though their boat is sinking.

And it’s no mystery that we must all be Water Protectors today if we hope to bring economic and environmental justice to our land.