Reentry Is An Itch

I’m back from the magical land of Burning Man. After wandering in that scintillating world for a week, I found it difficult to jump right back into my work on Double Happiness. But jump right back in I now have.

Two pieces of good news have lifted my spirits.

First, maps! The book is now map-ful, map-happy, map-alicious, with a large hand-drawn map of China ready for the frontmatter and sixteen smaller maps ready for the beginnings of eventful chapters. 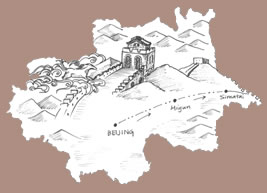 Working with an illustrator was a delight; the maps she created are sprinkled with illustrations that highlight events, people, places, and things in the story. A sneak peak at one map, just for you dear readers, is at right. (Click it to enlarge it.)

Second bit of news: An agency in New York has called several times and shown sustained interest and enthusiasm for both my writing in general and for Double Happiness in particular. Before I left for Burning Man, I discussed with them their interest. They were thrilled with my “beautiful style” and “phenomenal writing,” and they also envisioned some changes to the manuscript. After much thought and contemplation while wandering through the sculpture-laden, laser-festooned desert, while watching a number of splendid works of art burn, I reached clarity about Double Happiness: In its current shape, it is the book I was driven, inspired, possessed to write, it’s the story I needed to tell. In fact, it’s better — it’s more it than I even knew I could write when I began this marathon labor-of-love. And so upon my return I took a deep breath and shared this with them, that I’m done, that at least insofar as major rewrites go, I’m finished with this particular story. Minor changes are fine, of course. The question was then whether they were still interested in representing me and Double Happiness. And they are, they said. They are. Or… they may be. They asked to read the manuscript in its latest form to ensure they are “200 percent behind me.” So we’ll see. If they choose not to take me on, I will either approach other agencies or, more likely, proceed directly into the brave new world of Indie publishing.

As an aside, Indie publishing offers authors an increasing number of benefits, but going the traditional, conventional route — signing with an agent and selling the manuscript to a major house — still offers substantial advantages, including not having to deal with intellectual property issues that arise from the use of quotations. Double Happiness features small quotations called epigraphs opening many of its chapters; some of these are from ancient sources, such as the Tao Te Ching, but others are from more recent authors, like T.S. Eliot and Pearl S. Buck, and the use of these authors’ works is often in a dubious, weakly-defined area of the law called “Fair Use.” When one doesn’t explicitly have permission from an author to use his or her work, one is liable to be sued for copyright infringement. Not a lot of fun. Some of the authors I’ve approached have been very forthcoming in acceding that quoting a few dozen words from their work constitutes “Fair Use.” The people at Houghton Mifflin who control copyright to T.S. Eliot, on the other hand, informed me it would run $365 to use four lines of a 225-line poem.

Let’s call that an update. Double Happiness continues apace, on its hopeful way to your door. Click below to leave a comment.

PS: Yes, my Burning Man project, the Threshold of Heat and Light, lived in the desert and died peacefully in tongues of flame. It conjured into my life and the lives of those around me a wealth of unforeseen delights and challenges. I have photos; let me know if you’re interested; they richly feature a flamethrower.

Share:
Posted in Uncategorized
by Tony Brasunas on September 23, 2010